Groundbreaking for the plant began on November 18, 1952. To provide a suitable area for constructing the process and auxiliary buildings, a tract of approximately 4,000 to 6,000 feet was graded to a minimum slope for surface drainage. Altogether, site grading required nine million cubic yards of excavation and backfill. There were strict guidelines on the type of backfill that could be used, the method in which the fill was compacted and the final density of the fill. A well compacted base was important for buildings that measured in acres instead of square feet. The assurance of a minimum of settlement was essential because of the miles of piping which would be mounted in the buildings.

In the early stages of the project, a number of activities occurred almost simultaneously. Roads were built around and through the site to allow easy access to construction locations. Track alleys, external portions of the facility which allowed equipment to be lifted to the cell floor from motorized equipment or rail through a series of removable hatches, were needed for plant operation were constructed to facilitate movement of materials and supplies into buildings. In addition to the track alleys, 22 miles of railroad track and 25 miles of road were laid inside the plant area.

Administration offices, warehouses, cafeteria, and services buildings were constructed as temporary buildings with utilities such as power, water, sewage, and communications.

The 4,000 acre site which would become the home of the Atomic Energy Commission's new Gaseous Diffusion Plant.

One of the basic construction materials was concrete. To speed up construction, one central batching and mixing plant was erected to supply all contractors. It had a capacity of 200 cubic yards per hour and produced more than 500,000 cubic yards for the project. The daily cement requirement averaged 2,500 barrels. Transit mixers delivered concrete from the mixing plant to the job. Permanent overhead building cranes capable of handling up to 23 tons were installed early in order to use them for moving heavy equipment as well as pouring concrete.

During construction, there were onsite meteorologists to provide contractors with up-to-date weather forecasting so they could both schedule work properly and protect existing construction. Many times, this allowed contractors to cover fresh concrete with canvas to protect it from rain which was predicted to arrive as a result of a sudden change in the weather.

Approximately 100,000 tons of structural steel were used in the framework of the main buildings. Receiving, unloading and sorting the thousands of tons of steel at the site on schedule called for efficient teamwork. Standard lumber carriers transferred most of the material to the contractors' job locations.

The process buildings were of a standard industrial type with concrete foundations and floors, structural steel frames, and siding and steel deck roofs with built up roofing. Functional and plain, lined sheets of corrugated siding were bolted to the steel structures. Placement in the baseplates for columns of the buildings was held off as long as feasible to permit maximum foundation settlement. After placement at exact elevations, the baseplates were grouted beneath by a placement of low-shrinkage grout. In constructing ground floors of the process buildings, wire mesh was put into place and then concrete was poured to form a continuous slab six to eight inches thick. Concrete was struck off by a finishing machine which sped up the process and decreased labor cost; however, finishing to exact dimensions had to be done by hand.

The process building roofs were nearly flat with just enough slope for roof drainage. The roofs were constructed by spot welding a metal decking to the structural steel. Then one-inch glass installation was laid and covered with 4-ply built-up roofing and finished with a wearing course of cement and gravel.

One of the largest and most important operations in the construction work was the fabrication and assembly of the thousands of feet of piping for the process buildings. Piping conveyed the gas from one stage to another in the Gaseous Diffusion cascade. More than 600 miles of piping and 1,000 miles of copper tubing were installed in the plant. Prefabrication of more than 100,000 individual piping assemblies and 225,000 piping hanger assemblies provided great savings in time and money. Welders had to pass rigid qualification tests to determine what type of work they were qualified to do. This was necessary because of the variety of processes and variety of metals and alloys. At peak effort, 1,200 welders were employed. Altogether, the plant required 620,000 linear feet of automatic and hand-welding on pipes ranging from ¼” to 4 ½' in diameter.

Because of the highly corrosive nature of uranium gases, all steel piping had to be lined with pure nickel. In addition, cleanliness control was essential because the process gas is so highly reactive that it combines and reacts with almost every substance forming solids that could clog the system. Sections of pipe were dipped in chemical reagents in huge cleaning vats to remove foreign matter. Each piece of pipe was handled carefully to avoid contamination with dirt, dust or water. After dipping and cleaning, the ends of the pipes were sealed to prevent matter from entering until piping was welded in its place. Process building floors were not only swept, but vacuum cleaned to be spotless. The air pressure inside the buildings was kept higher than the air pressure outside to keep dust from getting in.

Since the gaseous diffusion process produced great quantities of heat, principally “heat of compression,” cooling towers were constructed for each of the process buildings to remove the heat. The towers were erected on concrete slabs 20” thick. Huge forms were used and reused in the pouring of the concrete basin walls. Columns and beams that were prefabricated at another area were hauled to the site on trucks and set in place by cranes. Redwood was used in the super structure of the towers to reduce decay. The cooling towers released 20 million gallons of evaporated water (steam) each day into the atmosphere.

The towers were one of the reasons that an adequate water supply was important to the location of the new plant. A pumping station at the Scioto River with a pumping capacity of 40 million gallons/day was erected to furnish the plant with water. The water was piped to the plants through a pipeline to the plant’s water treatment plant where it was then distributed throughout the site.

Power for the plant was generated by the Ohio Valley Electric Corporation (OVEC) and was delivered to the plant by two double circuit lines at a nominal 330,000 volts. In 1956, that was equal to the all-time high voltage record in the United States. Each circuit had a capacity of 1,000,000 kilowatts for line sections 50 to 75 miles in length. At the plant the circuits fed into substations that consisted of switchyards, switch houses and control houses. The switchyards required the largest oil circuit breakers ever used in this country. Once the enormous amount of power was stepped down by transformers in the switchyards, it was sent to the thousands of electrical motors and other machines within the plant by way of underground ducts containing a network of conduit, cable and wiring running from the substations. 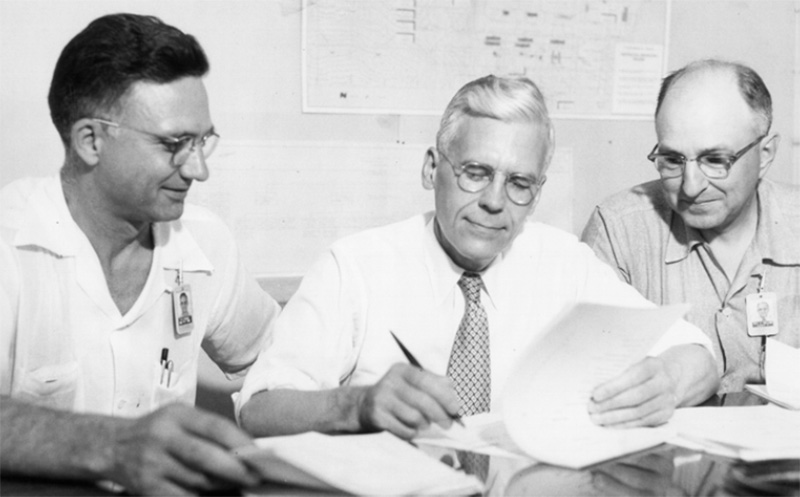